Competence in the sense of strengthening the patient’s autonomy is something that must first be learned. This goes beyond the mere accessibility and processing of information and primarily has to do with fundamental attitudes: How can I face changes? Am I able to experience myself as dependent without seeing this as a loss of my self-determination? I am convinced that a person can only be competent when he has learned to be so adept at coping with his illness that he no longer insists on complete restoration of his ability to function and can become so accustomed to what is irreversible that he can discover his own creative potential even in sickness. This includes the ability to experience having become sick not as an affront and the dependency on others not as the end of one’s own perspectives. Sick people achieve the best competence when they are not only “activated” but when they receive so much assistance and support that they are able to learn to live well with their illness.

Time and again, I see that severely ill patients in particular, for example, cancer patients, tend to trust their doctor’s judgment and delegate their decisions to their doctor. Here, as in so many other places, one must recognize that one cannot lump all people together and that it is not simply a matter of writing informative brochures about certain medical findings and then leaving the patients alone with these brochures. One only does justice to the patient when one also feels responsibility as a physician. Patients have a personal responsibility but overemphasizing this responsibility could tempt the health care professions to neglect their own responsibility as helping professions. This would be the result of the cult of personal responsibility: that in this way all responsibility would rest on the individual and the health care professions themselves would no longer genuinely internalize their own professional responsibility. “‘Responsibility’ is a scarce good,” notes the Frankfurt sociologist Helmut Dubiel, who himself contracted Parkinson’s disease at the age of 46, in his book Deep in the Brain which arose from his struggle with the disease. “It cannot be placed on someone without taking it away somewhere else.” The overstretched responsibility of the individual, as he indicates, could have “its downside in the new ‘irresponsibility’ of institutions such as the state and the health insurance and health care system that has found its way into all hypermodern societies in recent decades.” Especially in the face of the insidious advent of structural irresponsibilities, physicians and patients should learn to see each other as partners. Competence in Dealing with Limitations

What do freedom and responsibility mean and what does health literacy mean in this setting? For the person who has become sick, it means that the appeal for personal responsibility must never mean simply leaving him to his fate. On the contrary, I feel that all the health care professions must unmistakably show their willingness to assume responsibility for their patients. And society should not be allowed to withdraw from its responsibility to those in distress but should do everything in its power to be alert to any hasty overextension of the activation model. Additionally and not least, this means recognizing that the state with its concentration solely on activation and personal responsibility is secretly submitting to the classic laws of the market and has assumed a market-economy mindset that can have catastrophic effects for sick people in particular.

For the healthy person, health literacy could mean not pursuing the ideal of complete wellbeing but learning to live with the limits. It could mean not feeling powerless but realizing even in a precarious situation and under poor initial conditions that every one of us has potential. Using this potential does not depend solely on money but also on the inner attitude, on the feeling of being able to find joy simply in the fact of one’s existence. The French physician and philosopher Georges Canguilhem (1904–1995) defined health in this sense as a sort of safety reserve of response options:

“The healthy person measures his health by the ability to survive the crises of his body and establish a new order.”

I think health is not a state characterized by the absence of disease but one in which the disease risks and disease conditions can be taken into account as an integral part of life. Therefore, I would advocate describing health as a person’s ability to behave toward his limitations and even functional disabilities in such a manner that they can be integrated into his own concept of life. A healthy person is not one without impairments but one who has found out how to cope creatively with his own limitation and his fundamental vulnerability. A healthy person would therefore be someone who is not determined exclusively by his disease and who does not see himself as powerless even if not everything “functions” equally well. Viktor von Weizsäcker (1886–1957), the German physician and founder of psychosomatic medicine, put it very succinctly when he said: “The secret of health is not capital that one can exhaust, rather it is only present where it is produced at every moment of life.”

We live in a society where health is highly prized, yet it would be tragic if people did not realize that they can live a full life even in the presence of functional limitations insofar as they succeed in reflecting on their inner potential to overcome these functional limitations. In any case, it is of paramount importance that we realize that health is nothing that we can simply make or be certain of keeping with good will alone. Health is ultimately a gift that we receive without having earned and that we therefore should protect joyfully, maybe even thankfully, every day.

And what does that mean for medicine? Medicine has long based its self-image on the unshakable ethos of being on the patient’s side and offering him help without question. This unquestionable aspect of helping has been the basis for the trust in the humanity of medicine. Indeed, it is what has made all of medicine appear as a guarantor of humanity. Today, this unquestionable aspect of helping is gradually being rescinded, and this is being done very subtly. For this reason, physicians must unmistakably show that they will never withdraw from their core task, which consists in giving patients the indissoluble commitment that they as patients need: you will not be abandoned! Only in the deep awareness that medicine is on the side of the patient without reservation will patients feel strengthened and able to do something for their health.

Thus, the greatest danger of an excessive cult of personal responsibility lies in the fact that our society could be tempted to give up a social achievement with reference to the responsibility of the individual, namely the achievement of solidarity. A too one-sided pathos of personal responsibility could ultimately lead to erosion of public spirit, the collapse of the binding forces within our society, and the breakdown of a sense of community among all people. Each of us can only act autonomously when he feels supported by the reliability of social bonds, when he knows he has a stable frame of reference. The cult of personal responsibility has rendered this community-oriented frame of reference increasingly fragile and forces many people into an atmosphere of intimidation and fear, namely the fear of social indifference. Fear and intimidation are not a good basis for motivating people to take individually responsible action. Therefore, the concept of activation and individual responsibility must be pursued with a sense of proportion. It must not be so overstretched that what is basically a good idea ultimately leads to disastrous consequences, namely to social disintegration. Today there are shared values that cannot be framed in the entrepreneur’s slogan for himself. There are values that go beyond the value of personal economic success. And the awareness of solidarity with those who are worse off is such an incalculable value. I am profoundly convinced of this!

The current era of economization, individualization, and ebbing solidarity is a great challenge for the social character of medicine because it is to be feared that medicine has fundamentally changed and moved away from its genuine social task of helping to mutate from a helper into a judge over the patient. Helping the patient attain a health-promoting way of life remains a key requirement of medicine. Yet at the same time we should maintain the awareness that medical aid for sick people must not be linked to the discussion of possible personal guilt—even in the occasional case where it may appear obvious. For good reason, the physician’s actions have always been guided by the ideal of the unconditional helper. Attempts to weaken this paradigm shake the very foundations of medicine as a social practice. 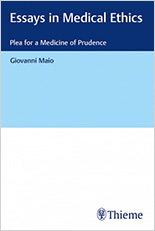 Based on: Essays in Medical Ethics
by Giovanni Maio

Professor Giovanni Maio, the eloquent advocate of a new culture of medicine, poses fundamental questions in this book that no one can really avoid: Where are the promises of reproductive and transplantation medicine leading us? To what extent can health be made, and to what extent is it a gift? Does "prettier, better, stronger" promise us greater happiness? Why is the question of organ donation more difficult than is suggested to us? Does being old have its own intrinsic value? How can we acquire an attitude towards dying that does not leave us feeling powerless?

Giovanni Maio's profound plea for an ethics of prudence opens up hitherto unknown perspectives. In this way we could free ourselves from the belief in perfection and find our way to a new serenity as a condition for a good life.