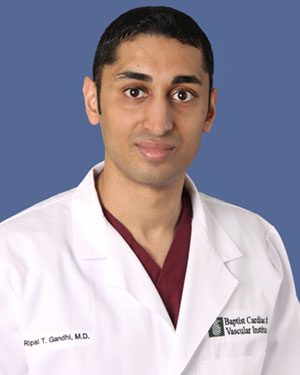 Dr. Gandhi graduated from Northwestern University summa cum laude and received his medical degree from Northwestern Medical School, where he also graduated with honors. Following medical school, he completed a surgical internship at Cornell Medical Center. He completed his residency and fellowship at UCLA Medical Center. Currently, he is an associate professor at FIU Herbert Wertheim College of Medicine and an assistant clinical professor at the University of South Florida School of Medicine. Dr. Gandhi regularly trains other physicians in various procedures. He dedicated an entire year to biomedical research at Memorial Sloan-Kettering Cancer Center, where he investigated hepatic embolization and other minimally invasive therapies for cancer. He has also served as a research fellow at the National Institutes of Health (NIH).

Dr. Ghandi has published his findings in several scientific journals, has authored several textbook chapters, and has presented his research at national and international meetings. He is an editor for IR Quarterly, Interventional Oncology 360, and Endovascular Today. Prior to joining Miami Cardiac & Vascular Institute, he was an international visiting scholar at Asan Medical Center/University of Ulsan Medical School in Seoul, South Korea. As an international scholar, he gave several lectures and furthered his expertise in innovative minimally invasive oncologic interventions. Dr. Gandhi is the recipient of multiple awards, including the American College of Physicians Certificate of Merit for Outstanding Performance in Medicine, RSNA resident research award, and scholar award/travel grant from the Society of Interventional Radiology. In addition, he was recently honored with the Patients' Choice Recognition Award, which is given to physicians most highly regarded by their patients. He is a fellow of the Society for Vascular Medicine. He is also a program director for the International Symposium on Endovascular Therapy (ISET) and Symposium on Clinical Interventional Oncology (CIO).