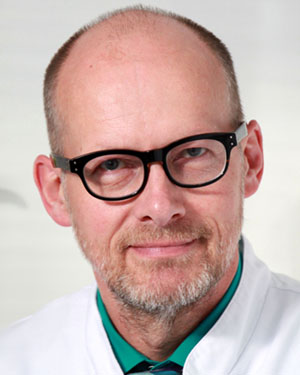 Dr. Randolf Klingebiel was born in 1957 in Hannover (Germany). He attended medical school in Hannover and Toledo, Ohio (USA). After a research fellowship at Fraunhofer Institute Hannover, he completed a residency in internal medicine and radiology at Medical School Hannover and affiliated teaching hospitals. He was a neuroradiologic resident at the Charité-Universitätsmedizin Berlin until 2003, at which time he took on the role of consultant neuroradiologist and acting Head of department, and then, 2006 Head of Department of Neuroradiology, Charité. From 2009 to 2014, he was primus inter pares at the Department of Radiology and Neuroradiology of Hirslanden Klinik Im Park, Zürich (Switzerland). Since 2014, he has been Head of the Department of diagnostic and interventional neuroradiology at Evangelisches Krankenhaus, Bielefeld (Germany). He is both a radiologist and a neuroradiologist. He received his M.D. in 1988 and his Professorship in Neuroradiology in 2011.