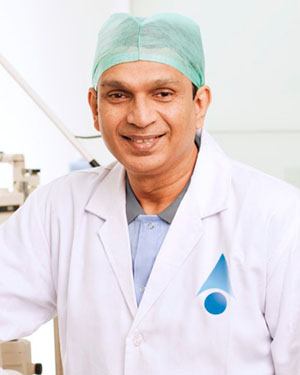 Amar Agarwal, MS, FRCS, FRCOphth, is the chairman and managing director of Dr. Agarwal’s group of eye hospitals, which has more than 60 hospitals worldwide, and Eye Research Centre, the past president of the International Society of Refractive Surgery (ISRS), and the secretary general of the Indian Intraocular Implant and Refractive Society (IIRSI).

Dr. Agarwal is the pioneer of Phakonit, which is Phako with a Needle Incision Technology, popularized as Bimanual phaco, Microincision cataract surgery (MICS), or Microphaco. He was the first to remove cataracts through a 0.7 mm tip with the technique called Microphakonit. He has also discovered no-anesthesia cataract surgery and FAVIT, a new technique to remove dropped nuclei, as well as a new refractive error called Aberropia. He was the first to combine microphakonit with a 25-gauge vitrectomy and to implant both a Glued IOL and new mirror telescopic IOL (LMI) for patients suffering from age related macular degeneration. He created the Agarwal modification of the Malyugin ring for miotic pupil cataract surgeries with posterior capsular defects. Dr. Agarwal’s eye hospital has also done the first anterior segment transplantation in a 4 month old child with anterior staphyloma. He also has used IOL Scaffold by injecting a three piece IOL into an eye to prevent the nucleus from falling in posterior capsular ruptures, and he has combined Glued IOL and IOL scaffold for PC rupture and termed the technique Glued IOL Scaffold. Dr. Agarwal’s eye hospital has also done the first glued endocapsular ring for subluxated cataract. Dr. Agarwal also pioneered Pre Descemet’s Endothelial Keratoplasty, or PDEK, and designed the Trocar anterior chamber maintainer. His eye hospital has also done the first CACXL or contact lens assisted collagen cross linking and has worked on E DMEK.

Dr. Agarwal has performed more than 150 live surgeries at various conferences. His videos have won many awards at ASCRS, AAO, and ESCRS. He has also written more than 60 books, which have been published in various languages. He also trains doctors from all over the world in his center on phaco, bimanual phaco, lasik, and retina.